We finally really did it.  YOU MANIACS! YOU BLEW IT UP! AH, DAMN YOU! GOD DAMN YOU ALL TO HELL!!!!-Charlton Heston-Planet of the Apes.

The quote from the Planet of the Apes came to mind the evening that I walked down Riverview Road and saw the mill water tank lying on its side on the ground. It was so incongruous and looked bigger than it had when it was perched on its legs in the sky. There an iconic part of the Grand Falls skyline lay crushed on itself amidst the rubble of the pulp and paper mill.

It was my second trip in since demolition had really ramped up and the second trip in since I started writing this particular piece, things had changed a lot from November to July. In November I had made the trip by myself on a fine and frosty November morning. In July I had come in though over 400 kilometers of downpour and fog bringing my family along with me. Strange parallel to many of the early pioneers who had come into work and then brought in their families after they realized that this leviathan that they were working on might actually be something permanent.

Back when it all started I can imagine a journalist or traveler making the same trip. Leaving the new railway station on water street and arriving at Grand Falls Station in the vicinity of ten hours later, but to get where I was going they would have had to stop and Badger and go by boat or canoe down the river with numerous portages. It was a different country then. The few pines that I passed between the road and the Exploits were vestiges, but they would have been smaller, younger vestiges then, by 1910 most of the pine near the Exploits had been cut. The forest would have covered everything save for the areas that had been burned over and no doubt there were acres of skeletal grey sticks in many places where the fires had swept unchecked by man until some form of nature could quell their flames.

Here and there the only sign of man would have been logging camps, constructed out of the very timber they were cutting and chinched with the same moss that carpets the forest. Now there is one that lies abandoned, most of it having been carried off by scavengers in the six years since it was closed. Here and there on the same sites, on the ponds and on the brooks you will see the odd cabin, their owners the main reason the road is kept up at all.

On the way back my counterpart in the last century would have gone to visit the “great pulp and paper works” that were being constructed. To stand in awe at the scale of the operation which had yet to be matched in Newfoundland at that time, The concrete and steel, the giant pen-stocks, the dam on the mighty river. The huge buildings that were to house the paper making machinery, hundreds of men toiling with pick and shovel, hammer and saw.

What I saw was the opposite. Because what was built over the course of one hundred years is now coming down. The men that built the pulp and paper mill are only ghosts. Instead of hundreds toiling and working all I saw were machines. All I saw were Yellow machines tearing and smashing, scrapping, deconstructing. I watched as one man with a cutting torch cut steel beams into more manageable pieces, listened as excavators hauled drum de-barkers out from a building. The mill had always been noisy in production, now it was almost as noisy in destruction.

It took a long time to build the mill at Grand Falls. Initially four and bit to build the first part of the mill and get it operational, then an expansion in 1912, If one took all the expansions into account it probably took more than a dozen years to build what is presently coming down. For years the complex was in some state of expansion, renovation or modernization: new paper machines, more grinders, new steam plant, new log handling system etc, etc. With every expansion at the mill, the town grew as well, additional construction and production meant there was a need for more workers both at the mill and in the woods. That was until modernization took hold in the 1960’s. Moby Joe when it was built dwarfed all the other buildings at the mill, but the big new paper machine also led to some of the first large scale layoffs in the mill, while at the same time skidders, trucks, chainsaws and slashers had slashed the labor force in the woods. By the end most of the woods work was being done by mechanical harvesters-which could level a football field sized forest in a matter of days. 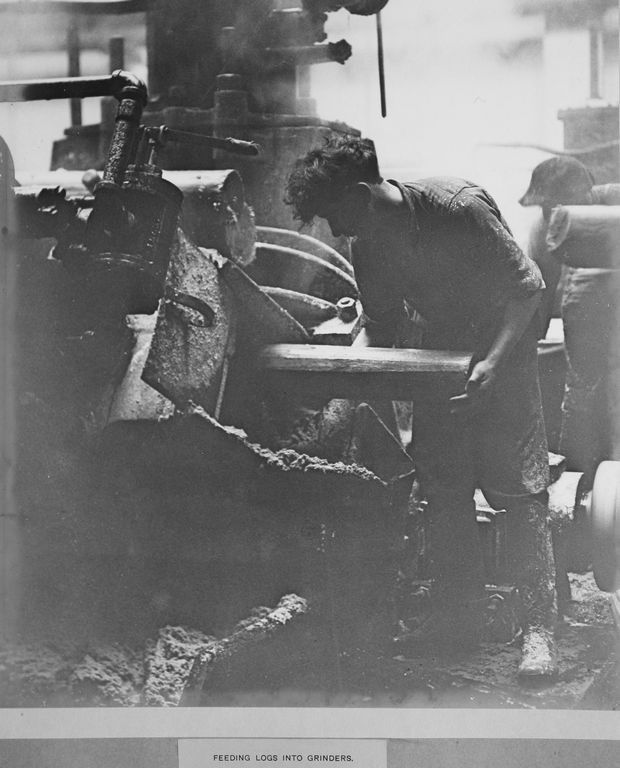 The easiest of the operation seems to be the largest component: Number 7 paper machine. Moby Joe. Unlike much of the rest of the complex number 7 was housed in a steel framed 1960’s vintage building. Number 7 machine shed dominated the site since its erection in the late 1960’s and, to many people, along with the smoke stack and the water tower represented the structure. By luck I showed up just as they started to peel that building. 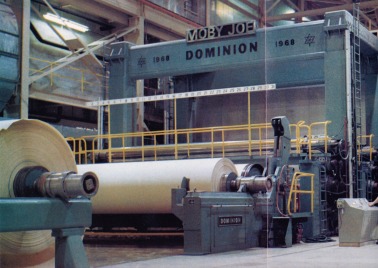 I saw inside the mill for the first time, even though I had written countless pages on its operation. I saw the paper machines and the hoisting equipment. Inside the paper shed which looked as though it had been torn open by a howitzer I saw rolls of paper, which later turned out to be wrapper. The next day the machines began to peel the siding off that building exposing the skeleton and the organs inside. When they are done all that will be left is the heart, the hydroelectric plant and dam.

One day soon enough the massive brick smokestack that has dominated the skyline since the 1920’s will be gone. By that point I don’t think there is going to be much left of the mill.

That day I left town and went backwards. I made it as far as Trinity Bay from where my great grandfathers had come to work building the same mill I had just seen bring demolished. Long, long ago the central interior was untouched country that held great promise.

One day we will be able to look out over the river where the mill now stands and hopefully somebody, like those old English industrialists did, will see potential.