The fire of 1986 is one that is etched to my memory. I was barely old enough to remember anything but I remember the helicopter that hovered overhead and the loud speaker telling everybody to evacuate the area. We were at Badger Lake and I was three. We had gone there because Grand Falls was in danger, the woods was burning all around. But instead we had to be evacuated though the fire back to town. Mom tells me she put my head under a blanket as we were escorted east with the woods on either side of the highway on fire. It was May 24th Weekend, 1986.

For a person growing up in Central Newfoundland it was not uncommon to see a sky filled with smoke and the blazing red sunsets that accompanied forest fires. Nor was it uncommon to see the swooping yellow and red water bombers or the helicopters with the tanks slung underneath as they worked to extinguish blazes. Little did I know at the time that a lone single engine aircraft circling the area was usually a spotter plane looking for fires.

The forests of the island have burned for thousands of years; thousands of acres have been destroyed possibly without a single soul ever knowing. The interior was sparsely populated even by the indigenous population. It was at the beginning of the twentieth century that forest fires became a serious issue and a serious concern.

In 1905 the Anglo-Newfoundland Development Company acquired the rights to thousands of square miles of timber lands. A first fire that could range for hundreds of miles was not good for their business. At the time most of the forest fires on the island were started by the railway-which had only started service across the island seven years previous. Though the railway had done much to open up the forests it had also done much to threaten them. A Royal commission in 1955 stated that something like 85 percent of forest fires were caused by the railway.[i] In the days of coal fired locomotives and no patrols the percentage was much higher. A passing train could start a fire in a number of ways mainly a stray ember from the locomotive smoke stack or from sparks generated by a braking train.

The first act to deal with forest fires in Newfoundland was passed the same time the AND Co came into being and paved the way for the creation of the Newfoundland Fire patrol. This group provided for patrols and towers in certain areas of Newfoundland with the AND Co being responsible for its own sector in Central.[ii] The original fire patrol was quite small with the entire staff numbering less than a dozen and responsible for hundreds of miles of railway track.  A patrolman would have to patrol and put out fires with nothing more than  bucket and a shovel.

Beginning in the 1920s patrolmen obtained velocipedes-a machine similar to a bicycle that traveled on rails and pump cars. later on they got motorized speeders. In these machines they checked the track in the wake of passing trains and extinguished any fires or embers. Later in the 1940’s the Newfoundland fire Patrol would be known as the Newfoundland Forest Protection Agency and would be a partnership between the Newfoundland Government (Which at the time operated the railway), The Anglo-Newfoundland Development Company and Bowaters.

The protection of its timber limits from fire was of great importance to the AND Co. It had its own railways and as such had its own patrolmen to monitor fires on them. Most of the timberlands were located far from the railway lines. So the “Company” had to build fire towers.

The woods fire towers were usually located on top of very high hills and sometimes consisted of an actual tower or in some cases just a shack to house the person watching for fire. The tower men were usually experienced loggers who were given the job for the summer months. They would man the towers were powerful binoculars. The towers were also equipped with telephones and in later years radios. In earlier years if a fire was spotted a call was made to the next camp and the call sent down the line.

Fire fighting in the woods in the early days was a difficult affair. The firefighters were in those cases whatever loggers were in camp at the time. It was not uncommon for men to be taken off the drive and taken into the woods to fight a fire. Accounts of this are limited but I was lucky enough to talk to my grandfather about it many years ago. 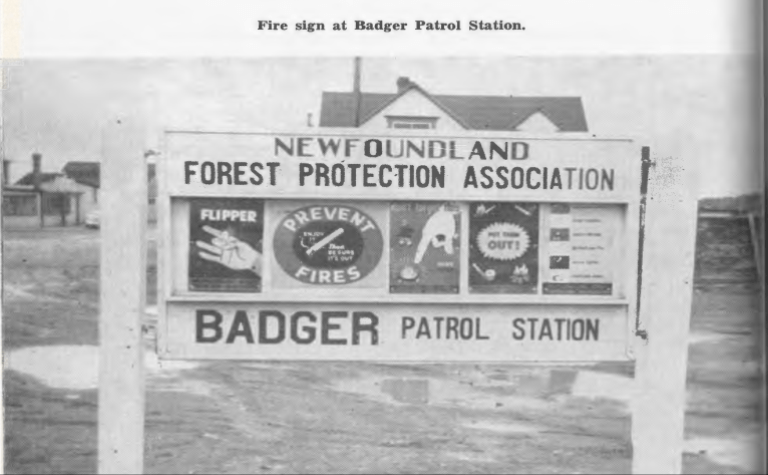 Pop had fought forest fires in Bishop’s Falls Division in the late 1940’s. Most forest fires occurred in spring and summer when the men were on the log drive. Loggers were taken off the drive and sent out with axes and hand pulps and reached the fires by truck, water or foot. They would cut fire breaks to try and stop the fire and use the backpack hand pumps to extinguish any hot spots. Pop told me that firefighting duty was preferred by some loggers because they were paid more and the food was better. If memory serves me correctly the government may have subsidized their pay and bought in canned food for the loggers when fighting fires.

In those times before water bombers I am sure that there are fires that were spotted that had to be left to burn themselves out or wait from rain because they were inaccessible.

The first water bombers to be utilized in Newfoundland seem to have come onto the scene in the mid 1960’s when the Newfoundland purchased some World War Two era Catalina(Canso-the difference was that one type had landing gear) flying boats and outfitted them to fight fires.[iii] The Anglo-Newfoundland Development Company operated its own Canso water bomber in the 1960’s.(According to a company information booklet)

The old Canso did served the government in fire suppression for over twenty years. They were capable of loading and dropping 8000 lbs of water per drop.[iv] This addition of air power was a great tool in the fighting of forest fires. Water bombers could reach remote fires and suppress them much easier than crews on the ground. The Canso’s appear to mostly have been retired around 1987-they were no doubt put to work during the fires of 1986.

That forest fire season 108,831 Hectares of forest were burned. Over 22 thousand hectares of merchantable timber went up in flames.[v] Parts of Grand Falls and Windsor were threatened; I believe things got particularly close on parts of Grenfell Heights and Windsor. From what I can gather only one house was lost.

We in Central are surrounded by forests and as we have seen from the recent fires in Alberta we have got off lucky. The area that Grand Falls-Windsor now sits was last burned over just a few years before the first surveyors showed up to stake out the mill site. If you dig into the ground you will hit a layer of ash from the times where a fire could burn for weeks unchecked and unknown.

[i] Newfoundland Royal Commission on Forestry 1955.

At that point the railway was undergoing dieselization which would have cut down on the fire risk.