Having never worked in the mill and not being from a family of mill workers (the last person in my family to work for A.N.D finished in 1951), I am a little ignorant of how many paper machines were operating at any one time at Grand Falls. I do know that a machine was shut down in 1989 (Number 6) and in the later  years of operation during  the 1990’s and early 2000’s there two were two machines in operation, one of which was Moby Joe, which was installed in 1968.  The other it seems was noted as “Number 7” which was the newest of the machines recorded in 1966, which was shut down in 2005.The Rock, paper Scissors

Luckily, my information up until the 1960’s is better than what I have for later years. I currently don’t have the speed or wire width for Moby Joe, or know if there were any additional machines installed after 1968 ( I do not believe there was).  In 1966 the following machines were at the Grand Falls paper mill. 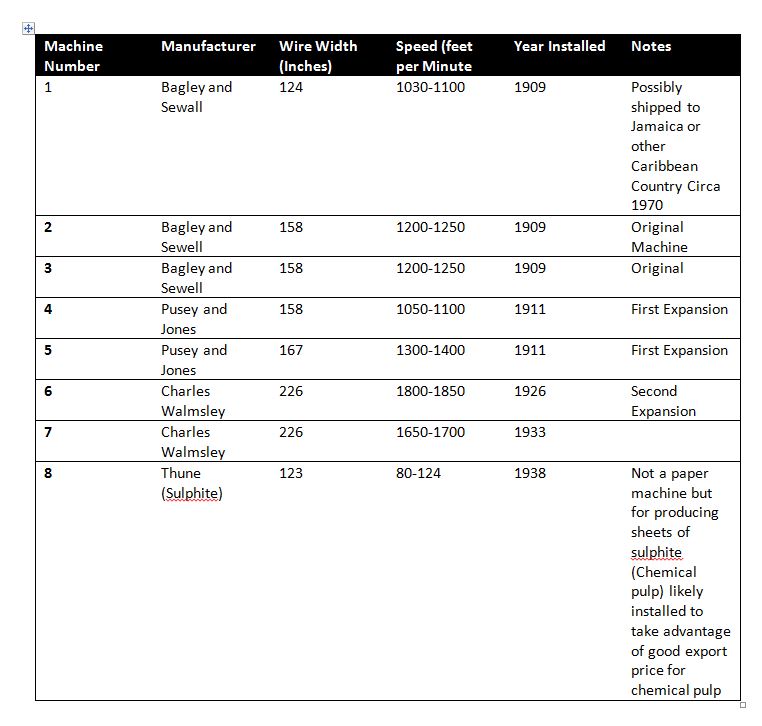 Between 1909 and 1966 there were 7 paper machines and one sulphite pulp machine installed at Grand Falls. At the time of this publication (Price Newfoundland, Facts and Figures, January 1966) a new paper machine was planned: “A large modern, high-speed newsprint machine capable of producing in excess of 400 (tons?) per diem is expected to go into production in late 1967. Estimated cost $20,000,000.00.” This machine wold be the one known as Moby Joe. I believe that Moby Joe was built by the Dominion Engineering Works of Montreal.

There are pictures of a paper machine aboard flatcars being shipped out of Botwood that were noted to have been “Number 1 being shipped to Jamaica.” I could not find any record of there ever being a newsprint mill in Jamaica, so if it went down there it is likely the experiment was not a success. I am not sure if the machine might have been re-purposed in any way, I do know that toilet paper and cardboard appear to be produced domestically in Jamaica. Most likely, the installation of Moby Joe allowed for the closure of some of the older machines without a loss in production, I am unsure of which machines though.

“Mar 10, 1970. No 1 Paper Machine enroute to Botwood to be loaded aboard ship for shipment to Jamaica. Finished loading aboard ship Friday, March 13, 1970 midnight. Machine took 28 cars with a total weight of 543 tons”. (Pictures and caption courtesy of Judy Dean Gill. )

I am still looking for the particulars of when most of the  the machines were shut down at the Grand Falls Mill. In particular I am looking for when 2,3, 4, and 5 machines ceased operation.  I do know that the Number 6 was shut down in November of 1989 and that another machine was shut down in 2005, four years before the entire operation shut down. Any additional information would be greatly appreciated.